I’m afraid to ask a stranger if I can take their picture.

It’s scary to think about.

I’m nervous they would think I was a creep.

They might think I was trying to flirt, or be a weird photographer dude like that emo kid from “American Beauty” running around filming plastic bags.

Or that I had some ulterior motive.

(Which, now that I think about it, I do have a motive.)

I am that emo kid from “American Beauty”…

Except the person I’m photographing is my metaphorical plastic bag.

Like, a humans of Marietta for my own camera roll.

The idea frightens me.

There’s a level of vulnerability, an openness for rejection that is required.

That’s why I did it. 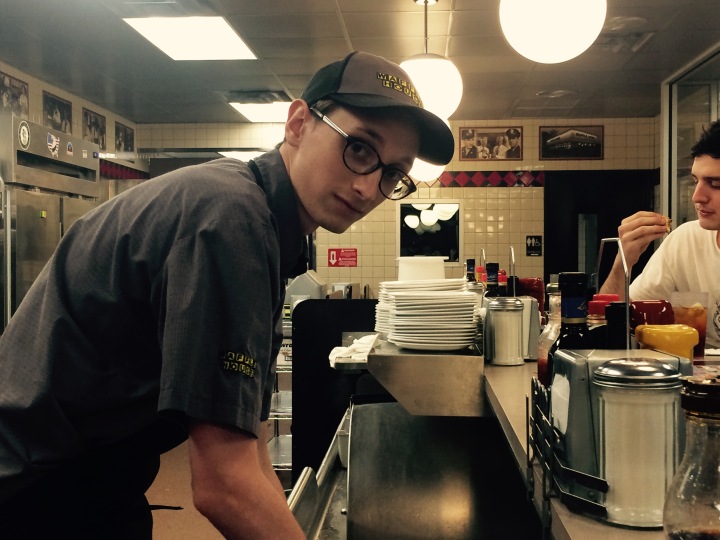 Griffin is a 19 year old college student. Earlier this year, he left his family in Florida and moved to Georgia to pursue his dream of becoming an Urban Planner.

While in Florida, Griffin had taken a class about architecture. He has always enjoyed parks and public transportation, but when he took that class, an interest was sparked. A desire to help create the ease of efficiency that public service provides.

Griffin’s goal is to attend GA Tech and enroll in their “Master of City and Regional Planning” program. He wants to commit himself to the field of maintaining, and creating, public amenities.

To do that, Griffin moved to Marietta and enrolled in Kennesaw State University. He will establish residence in the state, so when he applies to Ga Tech, he will be able to afford tuition.

Griffin had to leave his family for this goal.

When I met Griffin, he was working the overnight shift at Waffle House. During his job interview, the hiring manager told him that they needed overnight workers, Griffin complied.

He spends his days attending summer school at Kennesaw State (catching naps when he can) while working overnight at the local Waffle House to afford food, gas, and rent for his apartment.

There is always depth beneath the surface of what we project.

Allowing the parts of our story that shine to be seen.

But, underneath every iceberg is a foundation. The real story. The bits of ourselves that are rarely seen by others.

The parts we’ve built away from the eyes of the public. The experiences, intentions, and motives that give our stories depth.

Below the surface of a chance photograph at the local Waffle House, the motive and inspiration for passion is revealed:

In the realm of romance, energy provided acts as fuel for inspiration. Motivation and desire, the need to work for someone more than just yourself.

Behind every great man, is a woman. It’s a blessing if they remain in our lives long enough to receive it.

To become a better man for the one who deserves it.

Griffin’s story and mine are similar.

Although she’s not with me physically, and she will never know, her light in my life allowed me to grow.

Everything I’ve done; every word I’ve created, every audio I’ve twisted, every video I’ve edited. The challenges I’ve faced; the fear and anxiety I’ve confronted. My life has been an effort to prove something…

To prove to the girl I no longer know, that I can be a better man than I was for her.

2 thoughts on “This is Griffin”